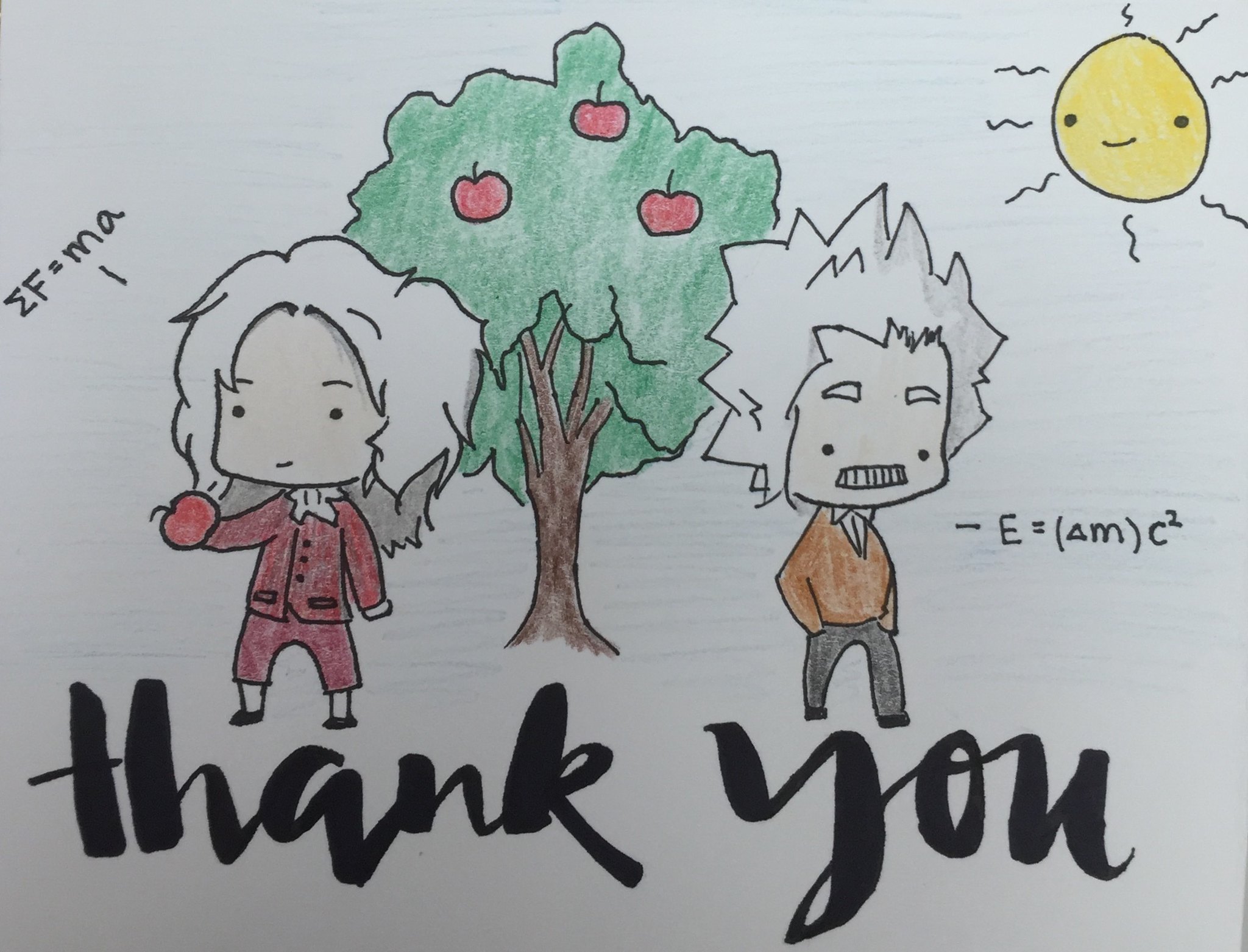 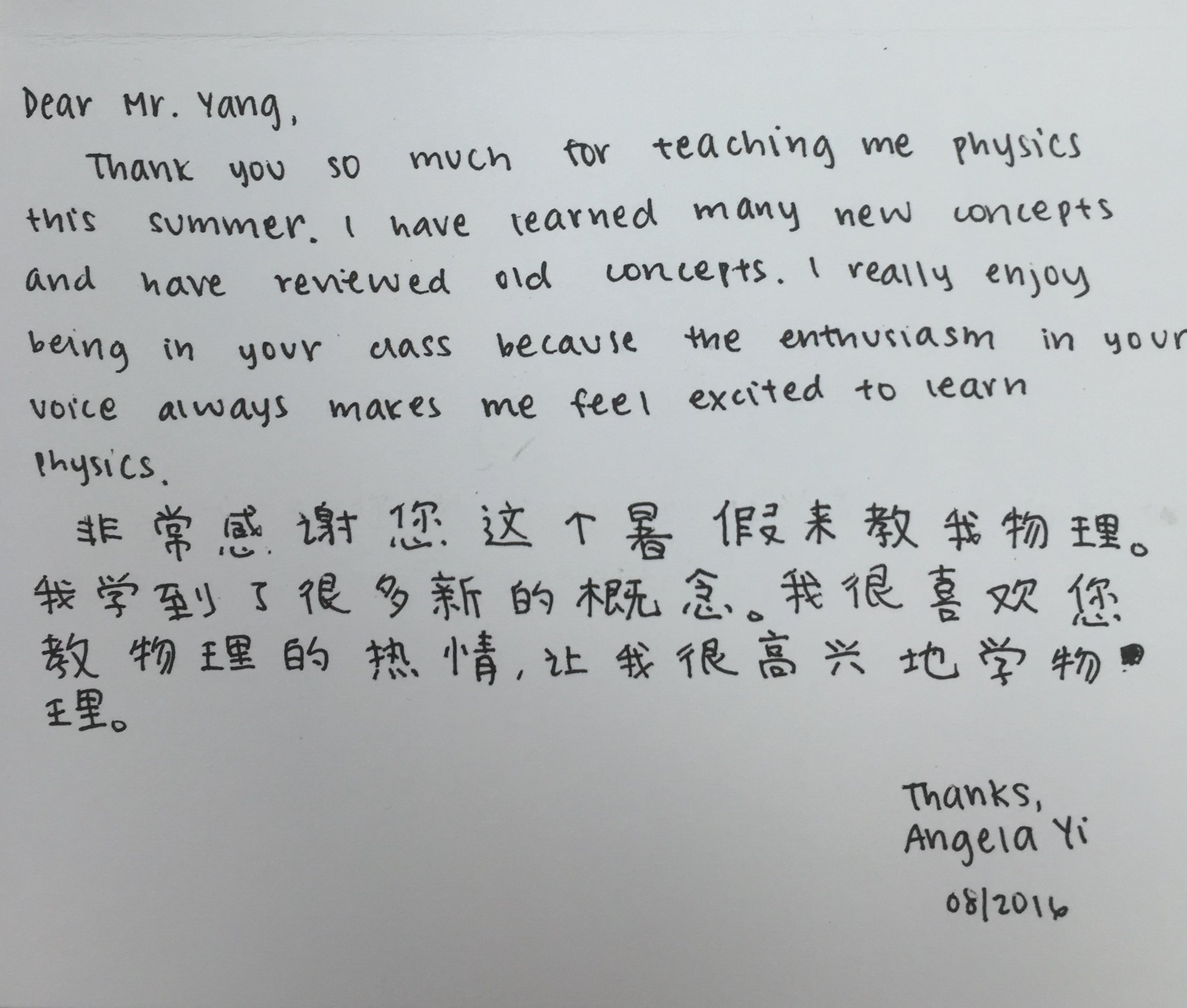 My son has taken the F=ma test three times in total, and only this time he has made it as a semi-finalist! Frankly speaking, my son is not especially talented in science subjects, and he has very average scores for everything. He took his first F=ma test 3 years ago without much studying beforehand and landed a score of 8, which is far below the cutoff of semi-finals. He took AP Physics in school 2 years ago and took a winter camp training course at another learning center. He scored 1 point below the cutoff that year. He was a bit discouraged and hadn't touched physics in the following year until I signed him up for Springlight’s winter F=ma training camp. I think it was the intensive training with Dr. Yang's unique way of coaching that revived my son's enthusiasm in Physics once again. During the camp training, he was eager to go to the class everyday, which is not like his usual slow-pace for other activities. In the car, he would think about some of his unsolved issues and questions to ask Dr. Yang; on the way back from class, he sometimes mentioned joyfully that Dr. Yang had told him he has good fundamental knowledge, or that he has the potential as long as he would be willing to work harder. These kinds of encouragement from Dr. Yang made my son very excited and he was willing to stay up late to solve more problems and bring more questions back to Dr. Yang the second day. I could see it was a very positive cycle of learning and digesting materials.

Making it into the semi-finals might not be a big deal to a lot of students in the Bay Area who have been easily trained in science subjects, but it is definitely a high achievement for my son. While still in this surprised and celebratory mood, my son and I would like to express our appreciation to Dr. Yang for his excellent F=ma coaching, and to SpringLight Education center for hosting such a valuable program.

I am really appreciate the physics classes by Dr. Yang from SprintLight.  My child has never learned physics before. After your encouragement, he started to watch the video recording of the AP Physics 1 on his own. And he scored 5 in the AP test. He is so happy!

At the moment I saw my son scored 5 on his AP Physics E & M part, I would like to express my thanks to Dr. Yang who teaches AP physics E&M at SpringLight Education. My son took the course from online. He didn't do any extra exercises or read any additional materials beyond what Dr. Yang had taught in class. He happened to be absent from school the whole week due to a tournament right before he took the AP tests. I was a bit worried. But he managed to finish Dr. Yang's video clips after he came back from his tournament and before he took the AP tests. Then he got 5 on E&M! According to him, Dr. Yang's lectures cover all the topics in the test and Dr. Yang's teaching emphasizes on concepts. After the class, his concepts about many topics got cleared. Thanks.                                     A. Z. July 9th 2018
---
Mr Yang,
I had some trouble with the mc, and one of the 12 point fr questions. However, there were some questions that mirrored almost exactly what you went over! I think the test today was more conceptual based(especially the mc) than the Barron's, which is why some of my friends thought that it was very hard. I'm very glad your class was concept-based. I don't know how I did(I answered all the questions though), but I think your class really helped me earn a lot more points than I would have gotten by self-studying. Thank you for helping me solidify concepts even out of class time!
Thank you for being our teacher!                         On Tuesday, May 2, 2017 9:36 PM, C X 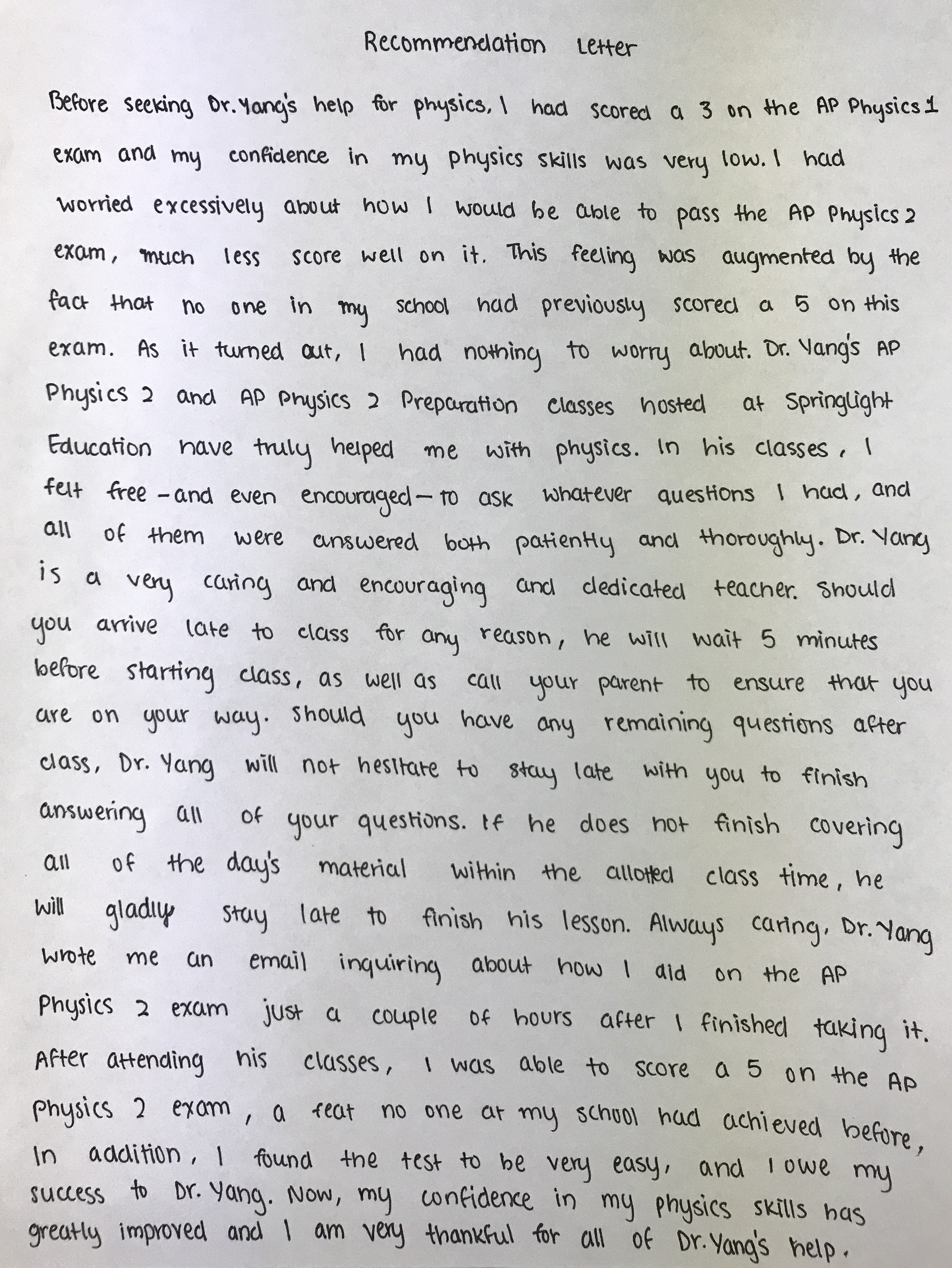 Thank you so much for helping me with physics this summer! Your classes are very fun and enjoyable and I really enjoyed taking classes on-site this time. Physics classes with you are always great and thank you so much for helping me to score a 5 on the AP Physics 2 exam!! Also, thank you for spending extra time with me to go over last-minute questions the day before the exam. It really helped boost my confidence and brush up on some topics. Your hard-work and dedication is very admirable and I hope to be able to attend more of you classes in the future! 🙂 谢谢！        C. K.

Before seeking Dr. Yang’s help for physics, I had scored a 3 on the AP Physics 1 exam and my confidence in my physics skills was very low. I had worried excessively about how I would be able to pass the AP Physics 2 exam, much less score well on it. This feeling was augmented by the fact that no one in my school had previously scored a 5 on this exam. As it turned out, I had nothing to worry about Dr. Yang’s AP Physics 2 and AP Physics 2 Preparation classes hosted at SpringLight Education have truly helped me with physics in his classes, I felt free - and even encourage - to ask whatever questions I had, and all of them were answered both patiently and thoroughly. Dr. Yang is a very caring and encouraging and dedicated teacher. Should you arrive late to class for any reason, he will wait 5 minutes before starting class, as well as call your parents to ensure that you are on your way. Should you have any remaining questions after class, Dr. Yang will not hesitate to stay late with you to finish answering all of your questions. If he does not finish covering all of the day’s material within the allotted class time, he will gladly stay late to finish his lesson. Always caring, Dr. Yang wrote me an email inquiring about how I did on the AP Physics 2 exam just a couple of hours after I finished taking it. After attending his classes, I was able to score a 5 on the AP Physics 2 exam, a feat no one at my school had achieved before. In addition, I found the test to be very easy, and I owe my success to Dr. Yang. Now, my confidence in my physics skills has greatly improved and I am very thankful for all of Dr. Yang’s help. 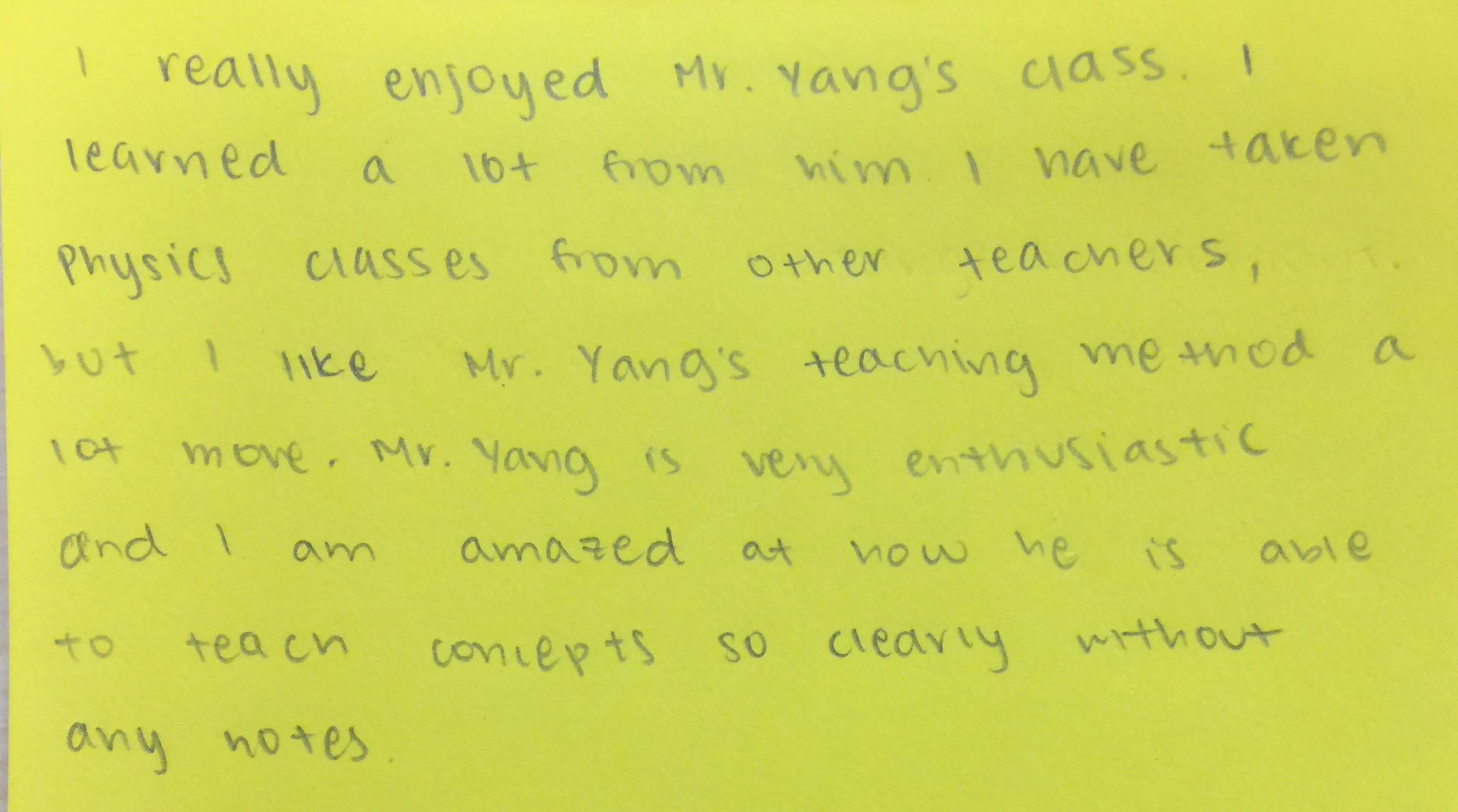